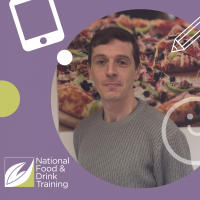 Martin has been with Uin Foods since early 2017, following many years in the retail sector. He began working in the packing section and spent around 12 months in that role when he was offered an opportunity to join the company's Modern Apprenticeship programme along with a transfer to the toppings section of the production line.

"The apprenticeship came up at the right time for me and the way my role was changing."

Martin was initially a little concerned about the commitment required from him to undertake certain aspects of the apprenticeship in his own time. Despite these reservations, Martin agreed to sign up and he very quickly began to appreciate that the work required at home was manageable. Perhaps more significantly, Martin began to see that he had been given an important development opportunity.

"As I worked through the units, I began to see how it related to my job and I understood that this was really going to benefit me as I developed my skills and knowledge," said Martin.

Martin was surprised at how different it was working towards his SVQ and apprenticeship from his previous educational experiences.

"It's not like sitting in a classroom and I found that hard to begin with. The way it works with the trainers makes you challenge and stretch yourself much more. You need to find the right answers for yourself instead of relying on someone telling you what the answers are. This helps you to relate all the learning to the job you're doing."

From his initial doubts about the programme, Martin is happy to admit that he very quickly developed a very positive attitude to the apprenticeship and fully committed himself to completing it.

Martin was promoted to Team Leader, Toppings as he worked through his apprenticeship, and he says that it directly helped him to be far more aware of all the important parts of this job.

In his words, "the process made me more mindful of my responsibilities."

He is clear in his belief that working towards his apprenticeship had a wider positive impact on the rest of the line too, contributing to maintaining high-quality products, minimising waste and maximising productivity.

In short, "everyone benefits."

Martin readily admits his attitude to work and learning has changed over time. He says his personal approach is far more positive and he has more ambition for his future. He can now see that there are opportunities for natural progression if he works towards them and he is hopeful that with the right opportunities and the right approach he can secure a supervisor role and eventually a managerial role.

Martin was quick to credit Gary Steele, Training Advisor, at National Food and Drink Training's with supporting him through the programme to a successful outcome.

"Gary was approachable and friendly at all times, but also made sure he challenged me to find the right path to success - he helped me though the process, but didn't ever make it easy on me," said Martin.

Overall, Martin believe the programme has helped him develop both personally and professionally. He is better and more committed to his job, feels a stronger sense of loyalty to Uin Foods and has greater ambitions for the future.

National Food and Drink Training (NFDT) was established in 2015 as a rebrand of Scottish Bakers training provision. This was a direct result of the strengthening of its portfolio to include lean manufacturing techniques and the delivery of the new Food Manufacturing Excellence (FME) qualifications.

Where to Find Us